Cultural Encounters on the Medieval March of Wales

Posted by: Catherine Clarke 6 years ago

On Saturday May 17, I participated in a research seminar at St John's College, Oxford, organised by Helen Fulton, who is currently a Visiting Fellow at the College. The event  was an opportunity to share work in progress and to continue the development of a proposed collaborative research project on the medieval March of Wales. 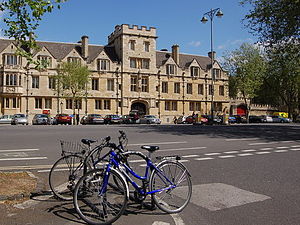 The colloquium brought together a diverse range of topics. Janet Burton spoke about the ongoing 'Monastic Wales' project; Emily Dolmans spoke on 'The Matter of the Marches: The Construction of the March of Wales in Fouke le Fitz Waryn', and Andy Orchard gave a fascinating paper on 'Sex, Bondage and the Welsh in the Anglo-Saxon Riddle Tradition'. In the afternoon, my own paper explored how our current project on medieval Swansea sheds light on borders and identities; William Marx discussed 'Manuscripts from the March'; Helen Fulton discussed 'Peniarth 50 and Glamorgan'; and Emma Cavell spoke about 'Matilda de St Valery and the Welsh'.

I learned a great deal and the seminar opened up some very interesting new perspectives and questions. It also really intensified my enthusiasm for our planned project on the March of Wales - and reminded me how important and useful this would be. There's so much interesting work going on this area, but, as the seminar showed, various kinds of borders - disciplinary, period, national - have meant that little of it has been pulled together in the past. Fingers crossed that we're able to take this forward...