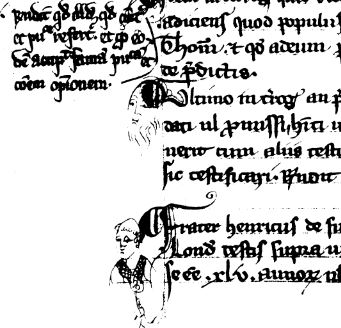 As we develop the visual and critical structure of the final ‘City Witness’ website, we’ve decided that it would be useful to include an image to represent each of the key characters in the Cragh story – from William Cragh himself, to the other eight witnesses, as well as other players in the narrative such as Lady Mary’s maidservants, Thomas de Cantilupe and the Virgin Mary (whom Cragh sees in a vision), and also the inquisitors themselves.

(An image from the Discover Medieval Chester Game)

We used pictures of imagined medieval characters in the ‘Discover Medieval Chester’ project, where various (fictional) inhabitants of the medieval city meet you with questions and advice as you play the Game. For the Chester Game, we based these characters on stock types – tradespeople and figures representative of medieval urban life. The pictures were produced by the company who made the Game, in a cartoon style which is accessible and engaging for the wide age-range of players we hope to attract. So: what approach to take for the characters in the William Cragh story? Cartoon-style drawings would again be accessible and attractive – but perhaps not entirely suitable for material which involves some pretty serious themes and its fair share of violence and brutality. Another practical issue is that we simply don’t have the budget to do anything too substantial. But then Harriett, fresh from her trip to the Vatican to work with the original manuscript, reminded us of the line drawings in the manuscript itself (which aren’t terribly clear in our facsimile versions).

On certain folios throughout MS Vat. Lat. 4015, there are simple, but expressive, line drawings in the margins illustrating medieval faces. Men, a woman, an ecclesiastic and even a young boy all feature in the pages. Could these marginalia be the basis of our character illustrations? We need to think carefully about the feasibility of converting these sketchy marginal drawings into useable digital designs. But the idea of drawing on something from the manuscript itself certainly appeals – and raises further questions about who drew these images, why, and how they use recognisable visual conventions to signify different ‘types’ of people to a medieval audience.