Making a saint: scrutiny and assessment 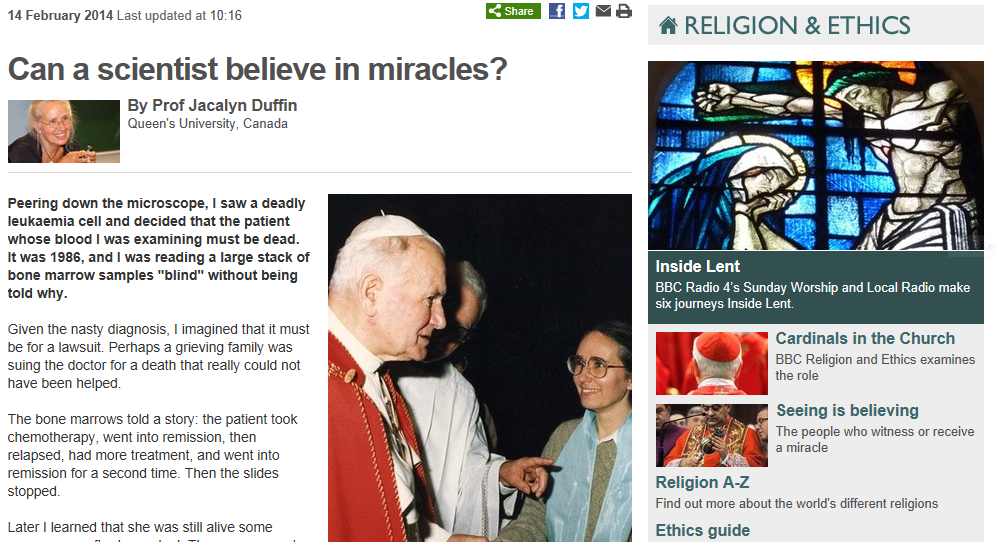 I recently came across this story on the BBC website, about a Canadian scientist (herself an atheist) who had been involved in the canonisation process for Marie-Marguerite d'Youville, the first Canadian-born saint.

Jacalyn Duffin describes how she was asked to look at slides with tissue samples which potentially showed evidence of a healing miracle. She was astounded to see the detail of evidence and scrutiny involved in the canonisation process.

Upon seeing the file of evidence compiled by the Vatican, Duffin writes:
'Suddenly, I realized with amazement that my medical work would reside in the Vatican archives. In that same instant, the historian in me wondered, what were all the other miracles that had been used for canonizations past? Were they healings too? What diseases were cured? Was medical science involved in the past as much as it is now? What did the doctor witnesses do and say?'

This inspired her to look at miracles of healing across several hundred years, to explore the historical interactions of medicine, science and faith, as well as some of the human stories involved.

The story of William Cragh, hanged and possibly miraculously revived in Swansea, 700 years ago, gives us another example of the detail and rigour of the canonisation process - even in the Middle Ages. The inquisitors are keen to hear even the most gruesome physical details of William's body after the hanging, as evidence that he was truly dead, and ask searching questions designed to ascertain whether this revival was a result of magic, trickery, natural healing, or a genuine miracle.